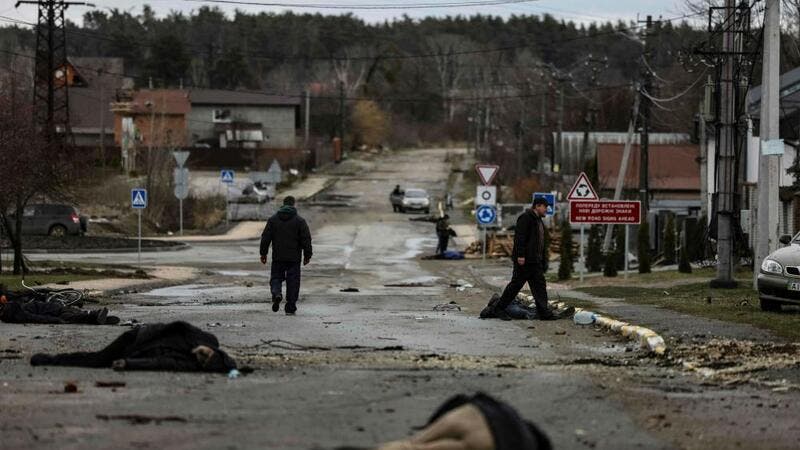 As Russian forces left the region of Kiev, large parts of which they had been occupying since the beginning of the invasion of Ukraine, atrocities were reported in several towns around the capital. The most shocking reports came from Bucha, a town with a pre-war population of 37,000 located about 15 miles north-west of Kiev, where many residents were apparently killed. Several pictures and videos of streets littered with corpses — some of them with their hands tied behind their back — have been posted on social media and the town’s mayor told the AFP that 280 people had been buried in mass graves. Russia has denied that it was responsible for those atrocities, claiming that pictures and videos of dead people were “staged” and arguing that Russian forces couldn’t have been responsible. In this post, I examine Russia’s argument, which I find unconvincing. I conclude that Russia almost certainly committed war crimes in Bucha, but that the extent of those crimes is not clear yet and that a thorough international investigation is called for to determine that and clearly establish who is responsible.

Russia’s argument that its forces are not responsible

The Russian Ministry of Defense published a post on Telegram in which it argued that Russian soldiers couldn’t have killed the people found in Bucha. The argument rests primarily on a comparison between the timeline of the Russian occupation of Bucha and that of the reports of atrocities:

We would like to emphasise that all Russian units withdrew completely from Bucha as early as March 30, the day after the Russia-Ukraine face-to-face round of talks in Turkey.

Moreover, on March 31, the mayor of Bucha, Anatoliy Fedoruk, confirmed in a video message that there were no Russian servicemen in the town, but he did not even mention any locals shot in the streets with their hands tied.

It is not surprising, therefore, that all the so-called “evidence of crimes” in Bucha did not emerge until the fourth day, when the Security Service of Ukraine and representatives of Ukrainian media arrived in the town.

Thus, Russia claims that its forces had completely withdrawn by March 30 and that even the mayor of Bucha confirmed on March 31 that Russian troops were gone, yet he didn’t mention any killings of civilians and the pictures and videos of corpses in the streets did not emerge until April 3.

Another argument that Russia made in that post is that the bodies shown in the pictures and videos published on social media are not in a state compatible with a death that occurred during the town’s occupation by the Russian forces:

It is of particular worry that all the bodies of the people whose images have been published by the Kiev regime are not stiffened after at least four days, have no typical cadaver stains, and the wounds contain unconsumed blood.

The implication of both of those arguments is that, if civilians were killed in Bucha, it couldn’t have been during the Russian occupation and they must therefore have been killed by someone else, but the statement actually goes further and concludes that the pictures and videos of dead civilians in Bucha are “staged” and the whole thing is a “hoax”.

I have to admit that when I read the argument about the statement by the mayor of Bucha, I was troubled by it, so I decided to look into it and this quickly convinced me that Russia’s argument didn’t hold water. It’s true that the mayor published a video on Facebook in which he called March 31 “the day of Bucha’s liberation” and didn’t mention any bodies in the streets. However, contrary to what Russia claims, this video was posted not on March 31 but on April 1 at 6:31 pm local time. As far as I can tell, the first video of corpses in the streets of Bucha was published on Telegram the same day at 6:42 pm and, in the next few hours, several other pictures and videos of similar atrocities were published on social media.1I thank Twitter user @novussubsole who alerted me to this Telegram post. In other words, while it’s true that the mayor of Bucha didn’t mention any corpses in the streets in his statement, pictures and videos showing bodies in the streets of Bucha emerged almost immediately after he posted that statement. It would still be weird if Bucha had been liberated on March 31, as the mayor claimed in his statement, yet he didn’t mention the corpses littering the streets in a video he published on April 1, but a closer look at the evidence shows that’s not really what happened.

Indeed, another city official had posted a video on Bucha’s official Facebook page that morning at 10:18 am local time in which he claimed that the city was still occupied, urged residents to be cautious and even mentioned corpses in the streets. Thus, according to that post, liberation was still in progress during the morning of April 1. My guess is that Ukrainian forces started entering the town on March 31, which is why the mayor called it “the day of Bucha’s liberation”, but either there were still Russians at this point or the Ukrainians were not sure yet they were completely gone and didn’t confirm it until April 1.2Another possible explanation is that Bucha’s mayor was simply confused about the date when he published his statement and mistakenly believed it was March 31. If the Ukrainian forces were still in the process of reoccupying the city on the morning of April 1 and people were not even sure that the Russians were completely gone at that time, it’s not particularly surprising that videos of the massacre didn’t emerge until later that day. It probably means that people were not summarily executed in every part of town, or at least that most of the corpses were brought to just some areas, but this is entirely consistent with the hypothesis that the Russian forces are responsible.

The other argument put forward by Russia is not particularly convincing either, but in that case I think a forensic investigation would be necessary to fully debunk it. Russia claims that, since its forces left Bucha on March 30 but photos and videos of corpses in the streets didn’t emerge until 4 days later, the bodies should have been stiff and more decomposed than they appeared. However, as we have seen, this timeline is wrong since, while it’s not entirely clear when the last Russian forces left Bucha exactly, the pictures and videos were first shared on the evening of April 1 and not on April 3 as Russia falsely claims. Furthermore, those pictures and videos don’t really allow us to judge the state of the bodies since they are dressed in warm clothes (let alone how stiff they were), so I find this argument totally unconvincing and don’t understand why anyone would take it seriously. Several Russian officials have also claimed that the videos coming out of Bucha are fake because the bodies of people supposed to be dead can be seen moving, but it has been shown that this was just because of low-quality video encoding.

Besides, The New York Times compared satellite pictures taken on March 19 with videos of bodies in a street of Bucha that were published on April 1 and found that the former showed the same number of bodies in the same positions as the latter, which implies that, even if we accept Russia’s claim that its forces left the town on March 30, several people whose bodies were later found in the streets were killed before that. I checked the temperature in Bucha between March 19 and April 1 on World Weather Online and found it was above freezing for most of that period, so I expect that the bodies must have been in a pretty bad state under the clothing, but only forensic examinations will be able to establish whether the state of the bodies is consistent with the timeline implied by the satellite pictures given the weather during that period.3If you are interested, I have created a spreadsheet with the minimum and maximum temperature in Bucha for the entire period of the Russian occupation. Forensic examinations will also be necessary to check whether the nature of the wounds on the bodies is compatible with the hypothesis that those people were killed by Russian forces, since even if they were killed during the occupation, they could have been killed by Ukrainian shelling of the town. However, in at least one case, we have a video taken by a drone showing Russian forces firing on a cyclist, whose body can be seen in photos and videos published after Bucha’s liberation.

I think at this point it’s virtually certain that Russian forces committed war crimes in Bucha. Not only are Russia’s arguments that its forces couldn’t have killed the people shown in pictures and videos shared on social media totally unconvincing, but since the town was liberated and images of atrocities emerged, many witnesses have testified that Russian soldiers had killed civilians in cold blood. Those testimonies seem credible to me, they are consistent with the evidence and, whatever you think of Ukrainian forces (who have also committed war crimes), I doubt they would have threatened local residents to force them to produce false testimonies incriminating Russian forces.4I wouldn’t say the same thing about, for example, the testimonies of people living in areas controlled by the al-Nusra Front during the Syrian Civil War. Some people argue that it doesn’t make sense for Russian forces to commit such gruesome crimes right next to Kiev and leave the evidence behind in the streets as they leave, but the My Lai massacre also made no sense and it still happened. Unfortunately, it’s not uncommon for foreign armies to commit atrocities against civilians, especially when losses and frustration mount.

In my opinion, the real uncertainty is about the extent of the war crimes that Russian forces committed in Bucha, not whether they committed any. As we have seen, the mayor initially claimed that 280 people had been found in mass graves, but as far as I can tell no journalist has been able to confirm that and it’s possible that the real death toll is lower than that. For instance, journalists from The Washington Post only saw 58 body bags lined up in the town’s cemetery, although what some officials told them implies a much higher death toll. On the other hand, the mayor’s deputy told Reuters on April 5 that while 300 dead people had been found after the Russian forces left, only 50 of them had been confirmed to have been the result of executions so far. So I think that we still don’t know exactly how many people were executed by the Russian forces in Bucha. For this and other reasons, I think an international investigation is needed to establish exactly who did what in Bucha, but again the conclusion that Russia committed war crimes over there seems beyond much doubt at this point.

nextCSPI is Moving To Substack