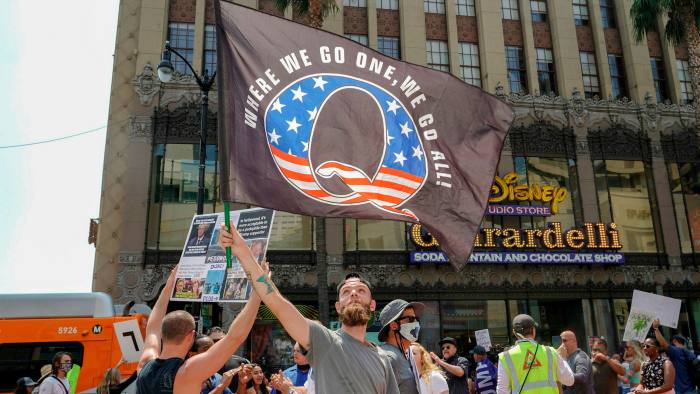 QAnon is a conspiracy theory in which a cabal of Satan-worshipping pedophiles is running a global child sex-trafficking ring and was plotting against Donald Trump throughout his presidency. Since 2018, an increasing number of Americans have become aware of QAnon, primarily through social media sites such as Facebook and online forums such as Reddit.

Understanding why QAnoners believe what they believe is by no means an abstract or niche question. The dissemination and acceptance of QAnon-related misinformation has had a number of real-world implications since the emergence of the conspiracy in 2018. For instance, the spread of misinformation about child sex trafficking led Polaris, an anti-human trafficking organization, to warn that its hotlines were being overwhelmed by false reports, thus preventing individuals from providing valid information.

In 2019, the FBI also published a report expressing concern over the potential for QAnon beliefs to motivate individuals to commit political violence – the first time the agency had rated a fringe conspiracy theory. These concerns were realized on January 6, 2021, when many QAnon believers were arrested for taking part in the storming of the U.S. Capitol building.

By identifying the types of messages that might lead to a weakening in support for the conspiracy, a variety of actors – for instance, non-profit organizations, government agencies, and social media platforms – should be better placed to develop strategies to combat misinformation.

In our new paper, we conducted an experiment to learn what types of messages might change QAnon beliefs, relying on a representative sample of 1,405 Americans. In testing what types of messages might increase support for QAnon, we exposed survey respondents to some information about QAnon support in Congress. We identified two Representatives – Marjorie Taylor Greene (GA-14) and Lauren Boebert (CO-3) – to use in our experiment. When respondents learned that these Representatives had expressed support for QAnon in the past, we found that they became more likely to support the movement relative to those who did not receive this information. However, this effect was largely driven by Republican respondents, who exhibited significantly higher levels of support for QAnon than Democrats who received the same information.

In testing for what types of messages might decrease support for QAnon, we also exposed survey respondents to some information about racist and anti-Semitic posts on Voat.co, a Reddit-esque news aggregator that provided a platform to many QAnoners. When respondents became aware of these posts, we found that such individuals expressed less support for QAnon. Racism and anti-Semitism are taboo belief systems, and by connecting them to QAnon, it may be possible to reduce support for the conspiracy theory.

We also tested whether learning about the origins of QAnon on the fringe online message board 4chan, or the many incorrect predictions made by QAnon influencers, led to a decrease in support for the conspiracy. We found that exposure to this information mostly had no effect either way. 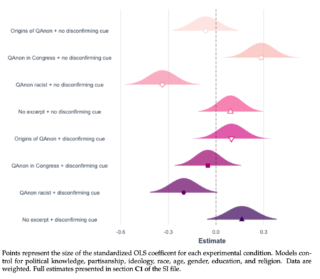 Beyond these various messages, we also found that a number of individual-level factors shape support for QAnon. Specifically, QAnon supporters knew less about politics, and were more likely to be Republican, politically conservative, younger, non-Hispanic and Catholic.

Our results indicate that, if non-profit organizations, government agencies, and social media companies wish to better combat misinformation and dispel conspiracy theories, then an effective strategy might be to connect them to racist and anti-Semitic views. Political endorsements also seem to matter, although when they were combined with disconfirming information in our experiment, the effect went away.

Even if the percentage of Americans who support QAnon remains in the low single figures, the events of January 6 indicate that any changes in support might be critically important for reducing the number of individuals who ultimately engage in political violence.

Jack Thompson is a Postdoctoral Research Fellow at the University of Exeter. His research interests include misinformation attitudes and voter behavior.

Sierra Davis is a PhD student in Political Science at Stanford University and a graduate fellow at the Stanford Center for American Democracy. Her research interests include political beliefs and partisanship, gender in politics, elections and voting behavior, and ideology and public opinion.

previousIs the Delta variant really more than twice as transmissible as the original strain of the virus?

nextHave we been thinking about the pandemic wrong? The effect of population structure on transmission