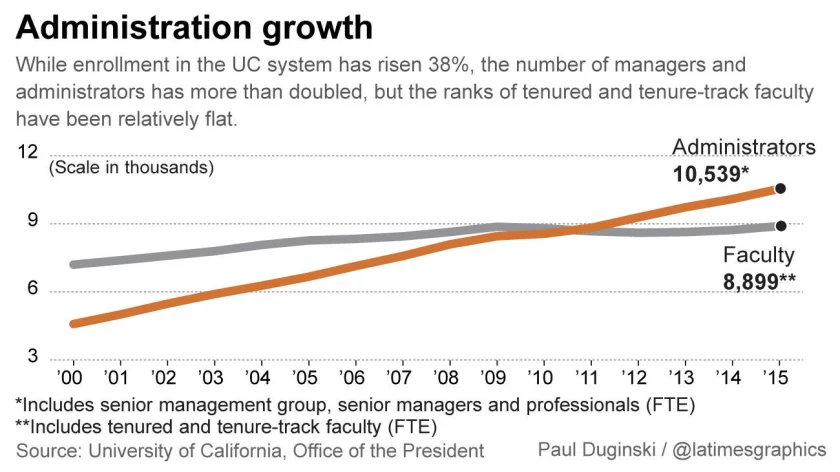 For decades, universities have worked to be more inclusive. Recently, they have rebranded these efforts under the general heading of Diversity, Equity, and Inclusion (DEI) and given those in charge of such initiatives more resources and power. Universities nationwide have added DEI offices without replacing other departments with similar goals, and have promoted such efforts as central to the university mission. To their supporters, DEI initiatives have led the charge toward more inclusion. To their opponents, they are a waste of money at best, and at worst, a force behind the growing intolerance towards dissenting views gripping universities and society more generally.

The figure above shows the increase in bureaucracy in the University of California system between 2000 and 2015 alone.

Regardless of where one stands in this debate, both sides can benefit from more information about these efforts. Just how much taxpayer money is being spent on DEI, and what are the offices doing? In order to find out, I began a research project for CSPI to gather basic budgetary information across a large number of universities. Unfortunately, it failed miserably.

Cutting the project several ways, I first cast a wide net to find budget information for 200 publicly funded universities from all 50 states’ budget officials. While nearly all responded to my “public-information law” requests, I learned that many state fiscal officials don’t maintain any detailed university budget information. They frequently keep only high-level university budget data. Considering that public universities receive about $171 billion in government funding annually, it was frustrating to find out that information about how money was spent was not easily available.

In response, I decided to undertake a less ambitious program. Using a much more modest public university sample, I directly asked seven individual universities’ public information agencies for their budgets on programs and offices regarding every DEI-associated term I could think of (“diversity, equity, inclusion, Title IX, women, African Americans, Latinos/Latinx/Hispanics, Native or Indigenous Americans, LGBT or any derivative thereof, Asian Americans, or migrants or immigrants”). This, too, proved unsuccessful. While two universities provided me with a detailed budget showing at least some of our requested information, an official from another institution stated there was “no search mechanism available that would allow us to identify the offices included in your keyword search.” The official then asked us to read through their “A to Z” office contact list (with 88 listings under the letter “A” alone) to select the relevant offices. She would then “work with our budget officers” to obtain the requested information. Cost: $30 or $75 per hour, depending on whether the specific request involves “database extraction.” Of the final four, one has promised a response by August 3, another has promised a response by some unspecified date, and two have completely ignored the request.

This brief foray into DEI budget searching revealed that, even if we had sufficient resources and time to make the relevant requests, it would be a massive undertaking and no matter what happens we would not be able to obtain comparable information across universities and states, nor any budgetary information at all from many universities. Back to Square One.

To make decisions about the value of DEI initiatives, legislators need to know what is going on in public universities, but as of right now, it does not appear that they can in most places.

In my decades-long career working for two state legislatures, I repeatedly witnessed bureaucracies operating in deeply stacked hierarchies and labyrinthine organizational charts, their activities opaque even to the trained eye. Universities are among the worst offenders. Be assured that – apart from any “greater good” objective – bureaucracy protects itself from anything it views as a threat. Public information laws alone cannot get behind this wall.

Universities have in recent decades been overrun with bureaucracy, much of it of dubious utility. I undertook a project hoping to at least get an accounting of how much money public institutions have been spending on DEI efforts. Despite laws meant to facilitate information being made available to the public, legislators and citizens continue to be in the dark about what exactly universities are doing with their resources.

Given the highly bureaucratic nature of the university, it is probably unrealistic to hope that this will ever change. Legislators have many things to worry about, while university staff can work full time to protect their prerogatives and interests. If it is impossible to find out exactly what the DEI bureaucracy in public universities is doing, the best path forward may be for state governments to make their own decisions about the value of more support staff and make sure that the aggregate budget reflects their choices.

Martha Bradley-Dorsey is a distinguished doctoral fellow in the Department of Education Reform at the University of Arkansas and interested in helping find greater educational opportunities for disadvantaged students and researching the effects of bureaucracies on those opportunities.

nextLockdowns, econometrics and the art of putting lipstick on a pig