I have a new article, Cui Bono? Partisanship and Attitudes Toward Refugees published in Social Science Quarterly.

We know that conservatives and liberals differ in their support for immigrants and refugees. Often, among academics, conservative opposition is attributed to racism or prejudice. Republicans are said to simply want fewer non-white people around. While this may or may not be true, it is at least worth considering the possibility that concerns about the Republican Party’s future motivates opposition to immigration. This was the thesis of Ann Coulter’s book Adios America, in which she argued that conservatives had to stop immigration or they would lose on every other issue they cared about.

In order to test this possibility, I conducted a preregistered study with a representative sample of white Americans. The survey asked them how open they would be to accepting certain refugees into the United States. The characteristics of the refugees were changed along the following three dimensions

The table below shows the results for liberals, moderates, and conservatives. 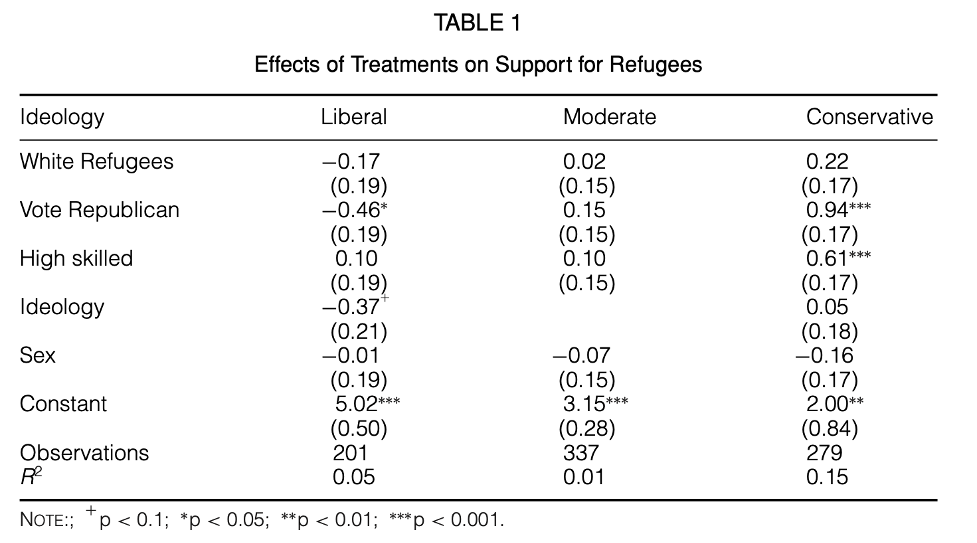 Race had no statistically significant effect on any group. Both conservatives and liberals, however, changed their views based on how they would vote. Only conservatives were affected by whether the refugees were said to be high-skilled and therefore presumably beneficial to the economy, or low-skilled and likely to rely on government assistance. Figure 1 below shows how partisanship, but not necessarily race, matters. The gap between the groups “very liberal” and “very conservative” in support for immigration is cut by around two-thirds when refugees are said to support Republicans instead of Democrats! 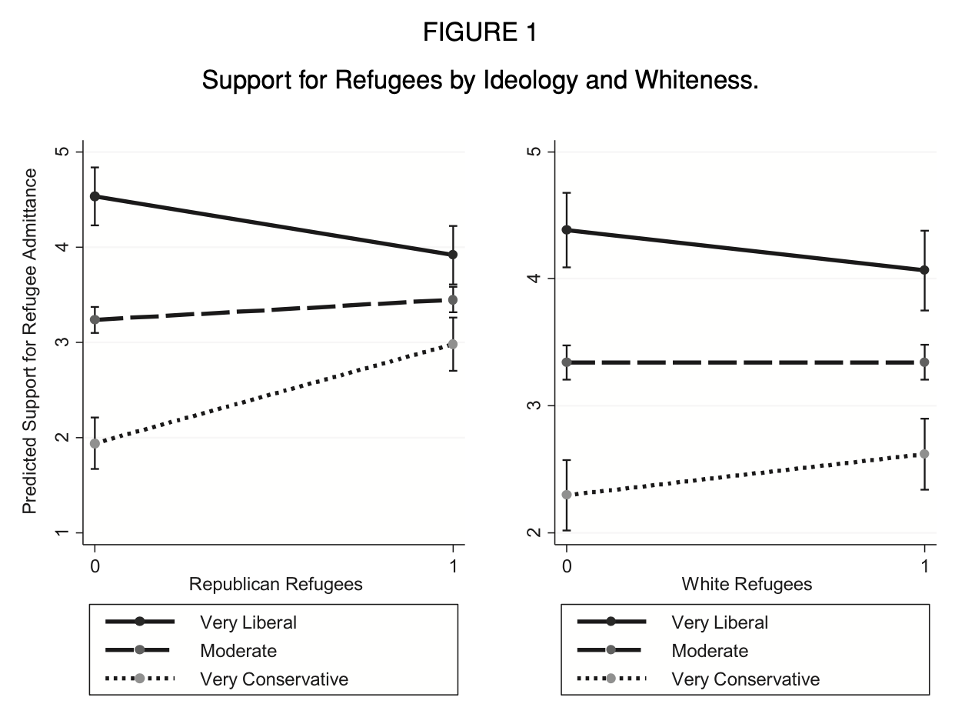 Interestingly, while Republicans did not change their support for refugees based on race, they did predict that the Ukrainians would assimilate better (p = 0.002), be better for the economy (p = 0.07), and vote Republican (p = 0.07), regardless of the treatments received. Thus, while conservatives did not let the origins of the migrants determine whether they would let them in, they did associate Ukrainian immigrants with more desirable traits, from their perspective. Whether this can be attributed to racism, or some other factor like ideas about previous waves of Latin American immigrants, is open to interpretation. Interestingly, liberals agree with conservatives that the Ukrainian refugees were more likely to vote Republican (.001 < p). They did not change their views on the assimilability of immigrants or their value to the economy based on national origins.

Although how white Americans view migrants and their likely impact on the country can be determined by race, partisanship appears to play a larger and more direct role.

In the 2020 election, Hispanics moved towards Trump in key states. If more Republicans could be convinced that immigration does not doom their electoral chances, they would likely become less restrictionist, even if they would be unlikely to go as far as liberals in their support for welcoming newcomers. Conversely, liberal talk about a rising permanent “Democratic majority” through immigration may backfire, as it is sure to make conservatives more likely to want to keep new arrivals out of the country.

nextIntegration, Youth, and the Decline of Black Democrats